Living in Egypt: Anti-smoking efforts a few decades behind the times

I'm happy to say I quit smoking almost one month ago. For some reason it is not that hard for me. I have smoked on and off since I was a teenager. I would quit for a while, start again, quit again, start again. Cold turkey every time - no patch, no gum, no hypnosis. I'm just fortunate I guess.

The last time I picked up the habit full-time again was when I moved to Cairo in February of 2008. It's hard not to smoke in Egypt - everybody smokes. Well, not everybody, but almost everybody and they are all too willing to share their cigarettes. Just show a taxi driver a cigarette and ask "momkin?" (may I?) and he will insist that you take one of his cigarettes even if you have your own. If someone offers you a cigarette in this situation - just take it. It is virtually impossible to politely refuse an offer in this culture especially when food, drinks, or cigarettes are involved. However, if someone gives you a Cleopatra cigarette you should just slip it into your own pack, or purse, or pocket. Do not, under any circumstances, smoke it. Unless you are already a seasoned Cleopatra smoker, if you smoke it you will soon learn why Egyptians have nicknamed these cigarettes KILLERPATRA. Cleopatra cigarettes are Egypt's generic brand. Aren't generic brands made with the tobacco they sweep off the floor at other cigarette factories?

In Egypt you can smoke just about anywhere. I was in the bank the other day and watched an employee behind a desk light up. People smoke in offices, movie theaters, hospitals, and even on school buses. Prior to my leaving the States, Vanderburgh County in Indiana had passed new no-smoking laws. Smoking was no longer permitted in restaurants. In Florida, smoking is banned in just about every indoor location imaginable with the exception of your own home (although it was not on the list). Even that won't be safe for long - several states are trying to pass laws making it illegal to smoke in your own car if you have children with you. In the last year in Cairo I have only seen one place officially advertising itself as a smoke-free environment - the CIC (Canadian International College) campus. There is a big sign posted by the entrance gate declaring that smoking is prohibited on the campus. A quick glance down at the ground and the piles of butts in the vicinity of that sign is indicative of the fact that they mean business. That doesn't mean there aren't other smoke-free places in Egypt, they are just few and far between. Even if a place has a no smoking policy it is often not respected, not strictly enforced, and there are infrequently penalties for violators. The one exception to this may be the Metro (subway), one place that I can actually say I have personally never seen anyone light up.

So with the ban on smoking in public places just now catching on in Cairo, other anti-smoking campaigns may soon follow suit. Take for example printed warning labels on cigarette packs. As a teenager (in the 80's) stealing cigarettes from my parents, I was very familiar with the - WARNING: The Surgeon General has determined that cigarette smoking is dangerous to your health. Over the years the warnings got a tad bit more morbid and scary. The point is, in the US warnings have been printed on the side of the packs for years. According to my husband, the only warning ever to appear in fine print on a pack in Egypt was: Not to be sold to anyone under 18 (and even that was only in the last few years). Last summer all that changed and pictures like this started appearing on every pack and brand: 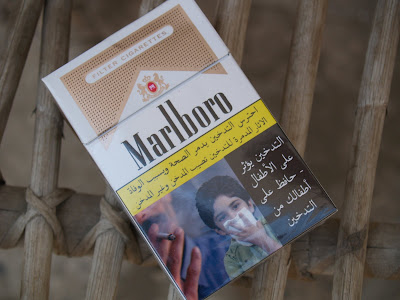 As of August 1, 2008 cigarette packs in Egypt were required to display graphic images depicting the dangers of smoking. The photo above is the newest one, arriving on the scene about a month ago. It replaced the one that showed a man, who appeared to be no more than 30, laying in a hospital bed looking rather pale and sickly, with a non re-breather hooked up to high flow oxygen. Do you know that feeling you get when you see the same person everyday, perhaps on a tv show, and you start to feel like you really know them even though you don't? Am I the only one who felt this way about that man? I saw this poor man day in and day out, laying there in that bed. Each time I purchased a new pack of cigarettes and saw his face all I could do was shake my head in disbelief. "Is this poor guy still in the hospital?" I would wonder to myself, "I should send flowers."

Now he's gone. Replaced by this poor boy being smothered by second hand smoke. Second hand smoke is most definitely not fun to be around (aren't ex-smokers the worst). But each time I see this picture I wonder why this kid just does not leave the room. I also wonder what school he goes to and what his hobbies are. He's only been around a month and I already got attached to him. Now that I've quit smoking I will really miss him.

To be completely honest here, the pictures did have a small effect on my decision to quit - the guilt got to me after a while. Of course I knew that the pictures were not real. Just cleverly staged advertising shots using professional models. Or were they? There is an urban myth about the photo of the man laying in the hospital bed. I call it an urban myth because I have heard this story by word of mouth from more than one person in Cairo, but I can't find anything about it in writing. Maybe I'm just looking in the wrong places, I will keep looking, but in the meantime I'll tell you the oral version.

The story goes that this man was actually a patient in a hospital, however, he did not have any smoking related illness. Some photographer took his picture and somehow it ended up as a stock photo and was used in the graphic for the cigarette pack. The man has allegedly sued over his image being used and allegedly won. Good for him.

It didn't take long for the comedians out there to come up with a satire of the original image. 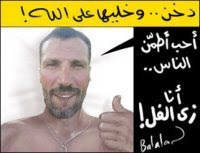 EDIT: Within the last two years, some cigarettes packs did carry a printed warning but it was not standardized with all brands. People simply switched brands thinking that only the brands with the warning labels were hazardous.

Posted by Fleeting Glimpse at 12:23 PM

Labels: Living in Egypt, only in Egypt