Living in Egypt: Riding the Metro in Cairo 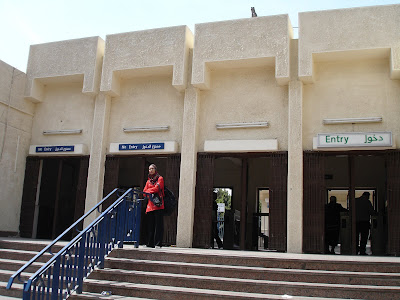 I know many foreigners living in Cairo who ride the microbuses. They are a cheap and easy way to get around, but are usually jam packed with people and not very comfortable. I have never had occasion to ride in one yet - mostly because they do not service the Maadi area where I live, but also because my husband and I have a car. If there are times when I need to go downtown by myself, however, I can easily hop on the Metro. The Cairo Metro (known as subway, underground, or "el" in the States) is a fast, cheap, and reliable way to travel around Cairo. While not all areas of Cairo are serviced by the Metro, you can easily get as close as possible to your destination and take a taxi, tram, or microbus the rest of the way. At the present time, there are two lines, with a third under construction. Line one runs from El Marg (Northeast Heliopolis area) to Helwan south of Maadi. Line 2 begins in the northern area of Shobra, intersects with line 1 downtown in Tahrir Square (Sadat Station) where it then crosses the Nile underground, heads west into Dokki, then south terminating in the outskirts of Giza. Line 3 will run West to East serving parts of Mohandiseen and terminating at the airport in Heliopolis. The train runs underground in some parts of the city and at ground level in some parts. Unlike New York and Chicago, the tracks are not elevated above the ground. It costs only one pound to ride the train. Service begins in the early morning hours 5:30 am and finishes at midnight (1 am during the summer). You can view a map of the Metro here. Station signs are in Arabic and English. 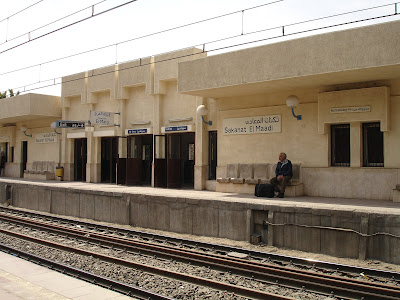 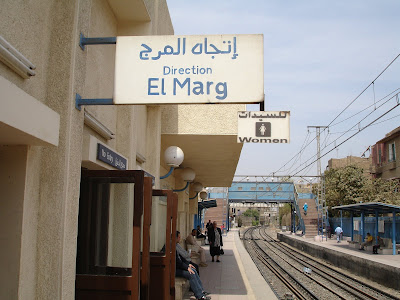 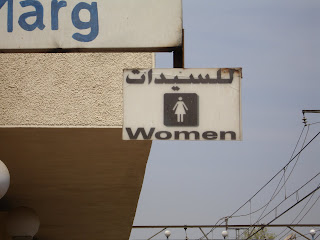 Women are permitted to ride in any car, but there are cars designated for women only. It used to be the first car of the train, but now the women's only cars are towards the back. You can find the women's car by looking for the signs (see photo on right) on the platform. The women's cars will stop adjacent to these signs. I prefer not to use the women's cars during rush hour because they tend to get more crowded. I personally have never had any problem at all riding the train. It can get pretty crowded at times so be prepared to push and shove your way through the crowd trying to get on. Not all the cars are air-conditioned and some have fans mounted on the walls, but they don't always work. For the money, the Metro is still one of the best, and fastest ways to get around Cairo.

In this video I was riding in one of the women's only cars:

Posted by Fleeting Glimpse at 1:44 PM