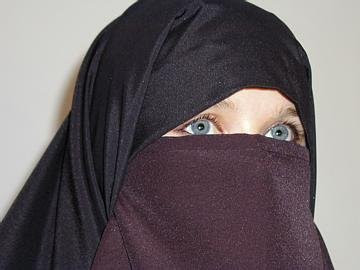 The Ministry of Religious Endowments held a series of seminars last month in effort to convince 16 of it's female employees wearing niqab that the full face veil was not obligatory in Islam. One woman removed her niqab immediately after the first seminar, two others followed suit after a second meeting. The 13 remaining niqabis admit that they are aware that niqab is not a requirement in Islam, but have stated that they are unable to remove their face veils simply because they have been wearing them for years and have gotten used to it. This move by the Egyptian government actually began over a year ago when they began distributing booklets at mosques trying to encourage women to remove the niqab. However, many women felt as if their rights were being infringed upon by this move.
To the average westerner, it appears that these women are oppressed and forced to wear the niqab by their husbands or families. Actually it is the exact opposite. Many women have chosen to wear niqab against their husband's or families wishes. Some women wish to become niqabis, but their husbands have forbidden it.
Take a look at what the women themselves are saying in these two Facebook groups HERE and HERE.
Posted by Fleeting Glimpse at 10:45 AM