Will Big Love in Egypt prove to be a big mistake? 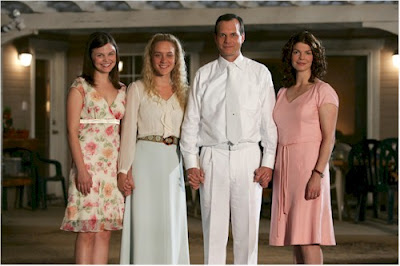 I was quite surprised to see that MBC4 will begin airing the American TV series Big Love on Tuesday. As an American living in Egypt, my life revolves around MBC4 (a channel headquartered in United Arab Emirates available around the world via satellite) which broadcasts predominately American shows, and MBC2 its sister station which shows American movies. I find myself happily watching shows I had never heard of or would never consider watching in the States - like The Gilmore Girls, Desperate Housewives, or Dr. Phil. But watching TV in Egypt is often not an enjoyable experience. For one thing it's all about repetition. If you fall asleep during the movie Speed - not to worry - it will be on again when you wake up in the morning. And if you oversleep and miss it in the morning, just wait a few more hours and it will be on again.

Another really annoying thing about watching TV in Egypt is the censorship. Although I have not quite figured out what their guidelines are yet. One Egyptian station broadcast the movie The Exorcist uncut in its entirety. While another station butchered and chopped the movie Babel beyond recognition. I have seen stations broadcast every curse word under the sun (although the Arabic subtitles do not reflect what is being said), and then edit and bleep things like: "mother of God", "pray the rosary", "in the name of the father", and "Jesus Christ". So apparently it is OK to say "fuck" and "shit" but it's not OK to talk about religion.

Censorship of movies does not end with TV, it gets even more absurd in the cinema. S and I went to a movie back in January. Wanting to see something English and funny we chose Jim Carey's new movie Yes Man. There were parts that were choppy and obviously something had been cut out, but when the movie abruptly ended with Jim Carey standing in a truck giving out clothes to homeless people, S and I just stared at each other in amazement. "That can't be the ending!" We both said in unison. Later I had W download the movie just so we could see the end. For all of you who have not yet seen this movie my apologies for spoiling the ending, but here it is: 500 people standing naked in an auditorium. The scene was shot from such a wide angle (the perspective of the man standing on the stage) that you could hardly see anything but a sea of people with muted flesh tones. It was so unbelievably silly that this scene was edited from the movie.

But starting Tuesday a large audience in Egypt will be bombarded with episode after episode of Big Love, the series now in its third season on HBO. The show is about a fictional fundamentalist Mormon living in Utah with his 3 wives and 7 children. When I was in Florida in December I caught a Big Love marathon on HBO in preparation of season three beginning. It was my first time to see the show. I have to admit it is not a bad show. It has some pretty big name stars in it and the acting lives up to expectations set by previous HBO series like The Sopranos. However, I can't help but wonder how a show like this will be received in Egypt, a country that takes religion ultra seriously. In Egypt, religion is very black and white without all the shades of grey we are used to in the States. You are either Muslim or Christian. I don't think a majority of Egyptians have ever know a Mormon, or Jehovah's Witness, or Seventh Day Adventist, or Christian Scientist, or Scientologist (with the exception of Tom Cruise) , or Pentecostal... Well you get the idea. And don't Middle Eastern countries already have the wrong idea about Americans due to negative stereotypes in the media? How is it going to look when they start seeing a show about an American guy and his 3 wives who practice a strange religion that borders on a cult. I don't know about you, but I also think polygamy is also a sensitive subject in a Muslim country. I have lived in Egypt for over one year, and have yet to meet a man who has more than one wife. It's just not all that common in the modern mainstream. It is often only the fundamentalists who you find boasting about their right to have more than one wife - 4 to be precise - in order to use religion as a tool to further exploit women.

Speaking of fundamentalists, my best friend from high school became a Mormon for a period of time in her life, but has since left the faith. I sent her an email asking her opinion of the show Big Love and her opinion of Mormons in general. Here is what she had to say:

"First of all (and I don't have to watch my language, right?), Big Love isn't
about normal Americans. It's about the fucked-up Mormons who disregard American laws and do whatever the hell they want to do because they said "god" told them
to. There is no bigger group of psychos in the atmosphere than the Mormons.
Their men are controlling, abusive, manipulative assholes who couldn't care less
about laws because they follow a COMPLETELY different set of laws. They do as
they are told (by other men) and the and female children women suffer. But those
are the polygamist Mormons. The sect of Mormonism I was in were more cowardly
than that. They had the control & manipulation down but they didn't practice
polygamy. That was the only difference. Big Love was actually a great show. It
depicted polygamist Mormonism in its true light and Tom Hanks is one ballsy
genius for doing it. I'm an even bigger fan now.

I can understand your concerns about the show being aired in Egypt. But maybe you can mention in your article that this is not America. This is Mormonism. It is not exclusive to America. It is worldwide, it is dangerous and it is disgusting.

I just hope everyone watching the show in Egypt gets it. 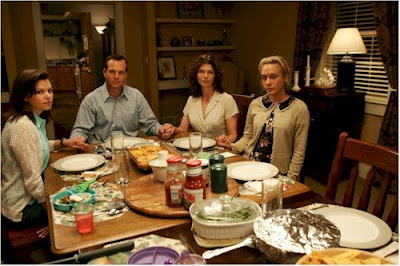 Posted by Fleeting Glimpse at 9:46 PM