When I first thought about moving to Egypt there was no doubt in my mind that my dog would come with me. But there was only one problem I could foresee - on my previous visits to Cairo I could not find any dog food. I went up and down the aisles at Carrefour and Metro and every other grocery store I went to, but the dog food section (if it existed at all) was relegated to a dark and dusty area consisting of about 3 square feet. In this space I was able to find cat litter, cat food, cat toys, and a one pound bag of dog food. That one pound bag was about 30 LE. This would not work for me by any means. My Rottweiler eats about one pound per day!

Typical American rationale: the dog food will be sold at the same place the people food is sold. Whenever I went to WalMart to shop for myself I could pick up a 35 pound bag of Purina Beneful. For a long time I would feed her Canidea brand that I would purchase from a feed store in Newburgh which was a 50 minute drive from my home. Once a month I would make the long journey and pay $35.00 for a 35 pound bag. After a while the money got tight and I had to switch to the Purina from Walmart since it was a lot cheaper. Now would I have to go back to paying astronomical prices in Egypt? Would I have to make her home cooked meals? I moved to Egypt with a 5 pound bad of dog food in my carry-on luggage. I would worry about what to do next after I got there. At least I had a 5 day supply with me.

In Egypt I discovered, in typical Egyptian fashion, there are stores that specialize in selling only pet food. I also discovered they have big bags of dog food after all. I decided to go for the economical brand that seemed to be widely available. A Purina Dog Chow imported from Spain. I don't remember how many Kilos the bag was, but it was 140 LE (around $24.00) and this would last for about 3 weeks. So it must have been approximately 12 to 15 pounds in weight. Similar in price and size to the bags of Purina I would buy in WalMart for $12.00. One thing I did not like about it was that it was packaged in plastic. Not good for the dog. She stayed on this food for her first year in Egypt. After that time, she began to develop digestive problems and changes in her bowel movements. I decided it was time to take her off this food and in retrospect, I wish I had done it earlier.

My husband found a pet store in another part of Cairo that had a brand imported from the US. He took me to check it out. It was a brand I had never heard of but it was manufactured in Evansville, Indiana of all places. I had always tried to stay away from "Dollar Store" brands with her and being this was a brand I had never heard of in the US, I was a little wary of it. But at this point I wanted her off of the imported food that was causing her problems. This was American made so I decided to try it. Now here is where the whole story gets funny. The store had three 50 pound bags. We were afraid that we would not be able to find this brand again because it is hit and miss with many imports in Cairo. The stores get one shipment and have the item one month, but when it gets sold out you may never see it again. So my husband made a deal with the shop owner to buy all three bags. A six month supply for us. 900 LE for the store owner. We loaded up the car and lugged all three bags up the four flights of stairs to our apartment. One of the bags ripped in the process and I had to quickly shovel the food into a trash bag. I introduced the new food slowly into her diet, mixing it at first with her old food, and gradually increasing the amount of the new. But her reaction to the food only got worse and not better.

In the end, we took the unopened bag back to the store and traded it for the Purina Dog Chow. We gave the opened bag away to a neighbor who has a large dog. The food in the trash bag was carted out to the street, little by little, and was strategically placed around Maadi for the street dogs.

After this fiasco we tried her on Royal Canin and she adjusted well to it (after eating cooked rice for a week). It is packaged in a foil bag and not plastic. The Royal Canin is available in a 17 Kilo bag (38 pounds) for the hefty sum of 480 LE which translates to a whopping $85.00. Nearly 3 times what I paid for the fancy organic food in the US. But she's worth it. :)

We also found a great pet food store on Road 9 - Amin Pet Food & Accessories. They are very knowledgeable about pets and pet care and have a wide variety of foods and supplies for cats and dogs of all sizes. If they don't have something in stock they will try to get it for you. Of course, delivery is available. 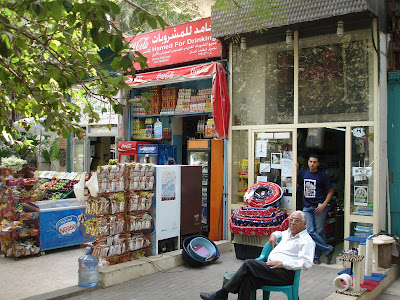 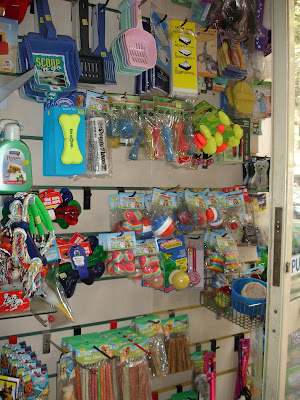 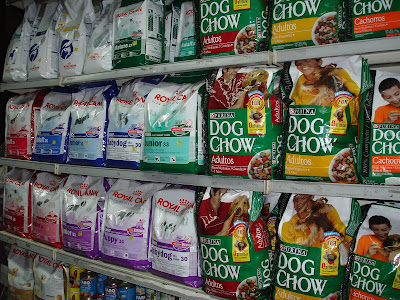 Posted by Fleeting Glimpse at 9:32 AM